The closing scenes of Quantum of Solace (James Bond, 2008) are memorable not only for the action, but also for the location: a beautiful terracotta coloured building set into the desert landscape. Chases are rendered even more dramatic by the seemingly infinite corridors. Fire and explosions abound. One of the first things I did after returning home from watching the film, was to find out where these scenes were filmed.

“It’s a stunning place! We were very lucky to be up there… it has been extraordinary!“ Daniel Craig, Actor 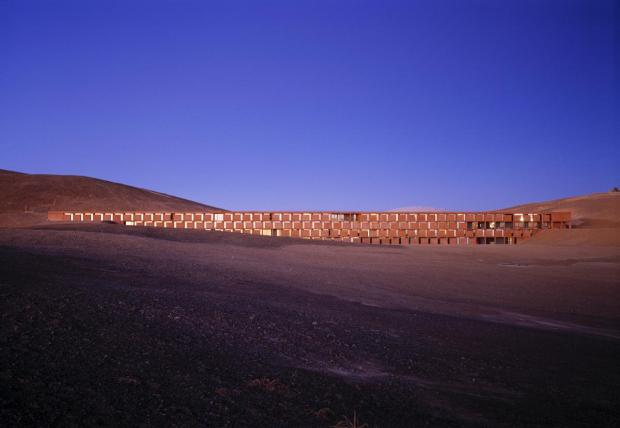 The building reflects and complements the dramatic desert landscape

The location is the foot of the Cerro Paranal mountain, in the Atacama desert in Chile (although in the film it is meant to be Bolivia). The structure is built to accommodate the staff at the European Southern Observatory (ESO). ESO houses the brilliantly named Very Large Telescope (VLT), the most powerful telescope on earth, and is the workplace of a small army of engineers, leading scientists and administrative staff from around the world. They work on a roster system, under extreme climatic conditions. Since the hotel’s completion in 2002 they no longer live in temporary metal containers, but in a place where they can relax between the demanding phases of their work. Lounge areas, a canteen, a swimming pool, fitness center and library, complement the 120 rooms, each with breathtaking views towards the Pacific Ocean. Not a hotel, in the strict sense of the word, it was built exclusively for the use of the workers at ESO, and is closed to the general public. 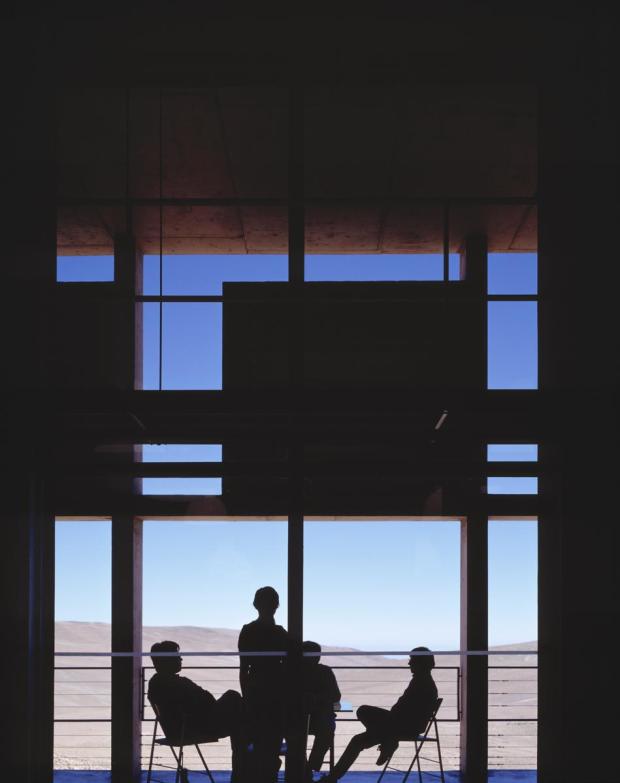 The building, at approximately 2,400 meters above sea level, is constructed into an existing depression in the ground. It resembles a dam, spanning across a desert rather than water. Deliberately contrasting the high-tech telescope complex at the Cerro Patanal summit, the hotel reflects and complements the dramatic rugged nature. Only the slightly raised dome above the central lounge area is visible above the horizon, creating a ‘formal counterpart’ to the telescopes huge concave mirrors. 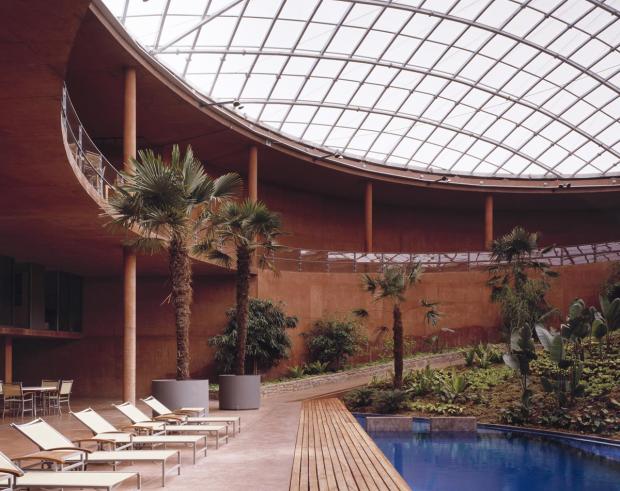 The central lounge area with its raised dome and generous vegetation

Faced with the infinite expanse of the desert landscape, with no point of reference other than the mountain, Auer Weber Architects took inspiration from structures such as the Loess dwellings in China and the Hopi Indians houses in the Mesa Verde (USA). Artistic inspiration came from the sculptures of Richard Serra : “They confronted topography with geometry, in the same way we intended to face the geographic, topographic and climatic challenges of our situation,” Auer

The main construction material is concrete, chosen by a process of elimination. Brick and steel were uneconomic, and impractical in terms of transportation. It was nevertheless inevitable in such a remote environment, that water to mix the concrete had to be shipped in. The exposed walls and ceilings were dyed with rust, matching the desert colour.

One of the main challenges was to not disturb the telescopes highly sensitive installations. Controlling light and air pollution were key. It was a strict requirement that the total light emission from the building should never be more than that of a 100W light bulb. Lighting designer Werner Lampl achieved that with a combination of indirect lighting, focused light beams and floor lights. 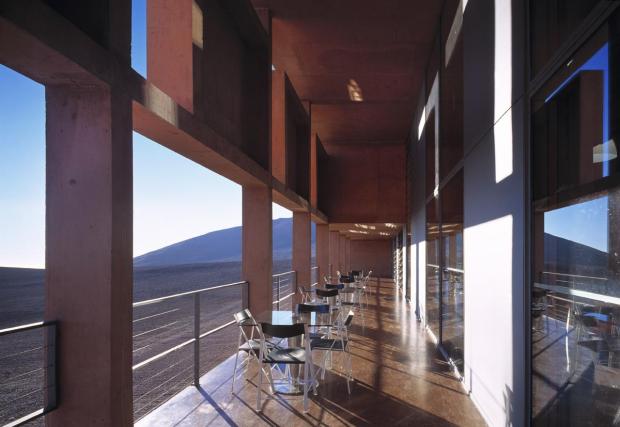 The danger of earthquakes in the area is very real. A number of measures were factored into the design in order to protect the structure from earth tremors. Most notably an innovative and new technique by structural engineers Mayr and Ludescher. They devised concrete blocks which are anchored to the ground with fibreglass mats which absorb any movement. “In the event of an earthquake, the structure would float above ground, thus absorbing the shock of the horizontal movement”, says Günter Mayr. It was also their job to ensure that construction methods generally were familiar to local contractors.

Ramps leading up to the rooms

The resulting building manages to achieve a symbiotic relationship with its harsh yet beautiful environment. It looks like its always been there, like the structures that inspired it. 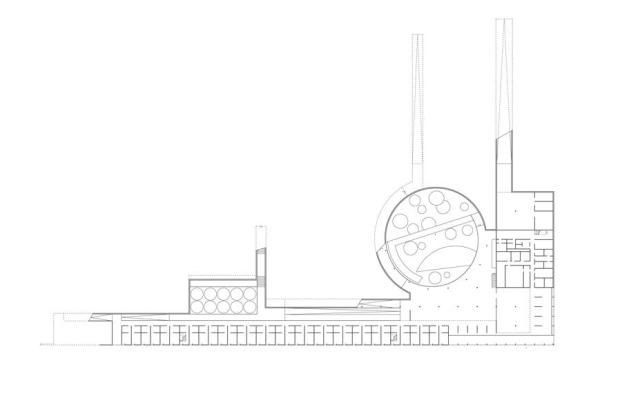